We were glad to receive Flat Stanley (Flat Lincoln) from Lincoln Swindle, Indiana, USA via e-mail. 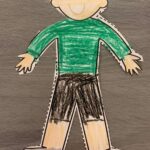 Indiana (/ˌɪndiˈænə/) is a U.S. state in the Midwestern United States. It is the 38th-largest by area and the 17th-most populous of the 50 United States. Its capital and largest city is Indianapolis. Indiana was admitted to the United States as the 19th state on December 11, 1816. It is bordered by Lake Michigan to the northwest, Michigan to the north, Ohio to the east, the Ohio River and Kentucky to the south and southeast, and the Wabash River and Illinois to the west.

Various indigenous peoples inhabited Indiana for thousands of years, some of whom the U.S. government expelled between 1800 and 1836. Indiana received its name because the state was largely possessed by native tribes even after it was granted statehood. Since then, settlement patterns in Indiana have reflected regional cultural segmentation present in the Eastern United States; the state’s northernmost tier was settled primarily by people from New England and New York, Central Indiana by migrants from the Mid-Atlantic states and adjacent Ohio, and Southern Indiana by settlers from the Upland South, particularly Kentucky and Tennessee.

Indiana has a diverse economy with a gross state product of $377.1 billion in 2019. It has several metropolitan areas with populations greater than 100,000 and a number of smaller cities and towns. Indiana is home to professional sports teams, including the NFL’s Indianapolis Colts and the NBA’s Indiana Pacers, and hosts several notable competitive events, including the Indianapolis 500.

Located in the Midwestern United States, Indiana is one of eight states that make up the Great Lakes Region. Indiana is bordered on the north by Michigan, on the east by Ohio, and on the west by Illinois, partially separated by the Wabash River. Lake Michigan borders Indiana on the northwest and the Ohio River separates Indiana from Kentucky on the south.

Indiana map of Köppen climate classification, now showing half the state as humid subtropical
In the past, almost all of Indiana had a humid continental climate (Dfb), with cold winters and hot, wet summers; only the extreme southern portion of the state lay within the humid subtropical climate (Cfb), which receives more precipitation than other parts of Indiana. But as of the 2016 update, about half the state is now classified as humid subtropical. Temperatures generally diverge from the north and south sections of the state. In midwinter, average high/low temperatures range from around 30 °F/15 °F (−1 °C/−10 °C) in the far north to 41 °F/24 °F (5 °C/−4 °C) in the far south.

While droughts occasionally occur in the state, rainfall totals are distributed relatively equally throughout the year. Precipitation totals range from 35 inches (89 cm) near Lake Michigan in northwest Indiana to 45 inches (110 cm) along the Ohio River in the south, while the state’s average is 40 inches (100 cm). Annual snowfall in Indiana varies widely across the state, ranging from 80 inches (200 cm) in the northwest along Lake Michigan to 14 inches (36 cm) in the far south. Lake effect snow accounts for roughly half the snowfall in northwest and north central Indiana due to the effects of the moisture and relative warmth of Lake Michigan upwind. The mean wind speed is 8 miles per hour (13 km/h).

Time Zones:
Indiana is one of 13 U.S. states that are divided into more than one time zone. Indiana’s time zones have fluctuated over the past century. At present most of the state observes Eastern Time; six counties near Chicago and six near Evansville observe Central Time. Debate continues on the matter.

Before 2006, most of Indiana did not observe daylight saving time (DST). Some counties within this area, particularly Floyd, Clark, and Harrison counties near Louisville, Kentucky, and Ohio and Dearborn counties near Cincinnati, Ohio, unofficially observed DST by local custom. Since April 2006 the entire state observes DST.

Indianapolis is the capital of Indiana and its largest city. Indiana’s four largest metropolitan areas are Indianapolis, Fort Wayne, Evansville, and South Bend. The table below lists the state’s twenty largest municipalities based on the 2020 United States Census.

Indianapolis:
Indianapolis (/ˌɪndiəˈnæpəlɪs/), colloquially known as Indy, is the state capital and most-populous city of the U.S. state of Indiana and the seat of Marion County. According to the United States Census Bureau, the consolidated population of Indianapolis and Marion County in 2020 was 977,642. The “balance” population, which excludes semi-autonomous municipalities in Marion County, was 887,642. It is the 15th most populous city in the U.S., the third-most populous city in the Midwest, after Chicago, Illinois and Columbus, Ohio, and the fourth-most populous state capital after Phoenix, Arizona; Austin, Texas; and Columbus. The Indianapolis metropolitan area is the 33rd most populous metropolitan statistical area in the U.S., with 2,048,703 residents. Its combined statistical area ranks 28th, with a population of 2,431,361. Indianapolis covers 368 square miles (950 km2), making it the 16th largest city by land area in the U.S.

Indigenous peoples inhabited the area dating to as early as 10,000 BC. In 1818, the Delaware relinquished their tribal lands in the Treaty of St. Mary’s. In 1821, Indianapolis was founded as a planned city for the new seat of Indiana’s state government. The city was platted by Alexander Ralston and Elias Pym Fordham on a 1-square-mile (2.6 km2) grid next to the White River. Completion of the National and Michigan roads and arrival of rail later solidified the city’s position as a manufacturing and transportation hub. Two of the city’s nicknames reflect its historical ties to transportation—the “Crossroads of America” and “Railroad City”. Since the 1970 city-county consolidation, known as Unigov, local government administration operates under the direction of an elected 25-member city-county council headed by the mayor.

Indianapolis anchors the 29th largest economic region in the U.S., based primarily on the sectors of finance and insurance, manufacturing, professional and business services, education and health care, government, and wholesale trade. The city has notable niche markets in amateur sports and auto racing. The city is home to three Fortune 500 companies, two major league sports clubs, four university campuses, and several museums, including the world’s largest children’s museum. However, the city is perhaps best known for annually hosting the world’s largest single-day sporting event, the Indianapolis 500. Among the city’s historic sites and districts, Indianapolis is home to the largest collection of monuments dedicated to veterans and war casualties in the U.S. outside of Washington, D.C.