Chess is a very popular two-player strategy game thought to have originated in India many centuries ago. To win the game, you must “checkmate” your opponent by moving your pieces such that the opponent’s king faces a threat of capture that can’t be eliminated. Although it has a set of easily comprehended rules, it takes strategy in order to defeat a skilled opponent. After learning the basic rules and playing practice games, you’ll be able to challenge other players and win!

Setting up the Board and Pieces

EXPERT TIP
Understand the basics of a chess set: Chess is played on a board that is made up of 64 alternating black and white squares. The chess set is made up of 32 pieces, 16 for black and 16 for white. Each set consists of 1 King, 1 Queen, 2 Rooks, 2 Bishops, 2 Knights, and 8 Pawns.

Learn the rank and file system to place pieces and keep notation. Ranks are the horizontal rows and the files are the columns going between the players. Ranks are listed 1-8, starting with the side of the board with the white pieces. Files are listed as the letters “a” through “h” starting from the white player’s left side. Reference a specific square on the board by listing the rank followed by the file.

Place the rooks in the corners of the board. Rooks usually look like castle towers and can move any number of squares horizontally or vertically, but they cannot jump over other pieces. Place the white rooks on squares a1 and h1, and put the black rooks on squares a8 and h8.

Set the knights next to your rooks. The knights look like horses and move in L-shapes by going 2 spaces horizontally and 1 space vertically, or 2 spaces vertically followed by 1 space horizontally. Put the white knights on the squares b1 and g1, and set the black knights on b8 and g8.

Put the bishops next to your knights. Bishops are the third-tallest pieces in your chess set and move in a straight line diagonally. If you’re the white player, place your bishops on c1 and f1 and put the black bishops on squares c8 and f8.

Place the queens on their matching colors in the back rows. Queens are the second-tallest pieces and can move any number of squares in any direction as long as there isn’t a piece blocking the path. Put the white queen on d1 and the black queen on d8 so they’re directly across from one another.

EXPERT TIP
Queens are the strongest pieces in the game, and they can move horizontally, vertically, and diagonally.

Place your pawns in the row in front of your other pieces. Your pawns are the shortest and weakest pieces in a game of chess. Pawns can only move 1 space forward toward your opponent’s side of the board. Put 1 white pawn in each square of rank 2 and set the black pawns in the squares of rank 7. 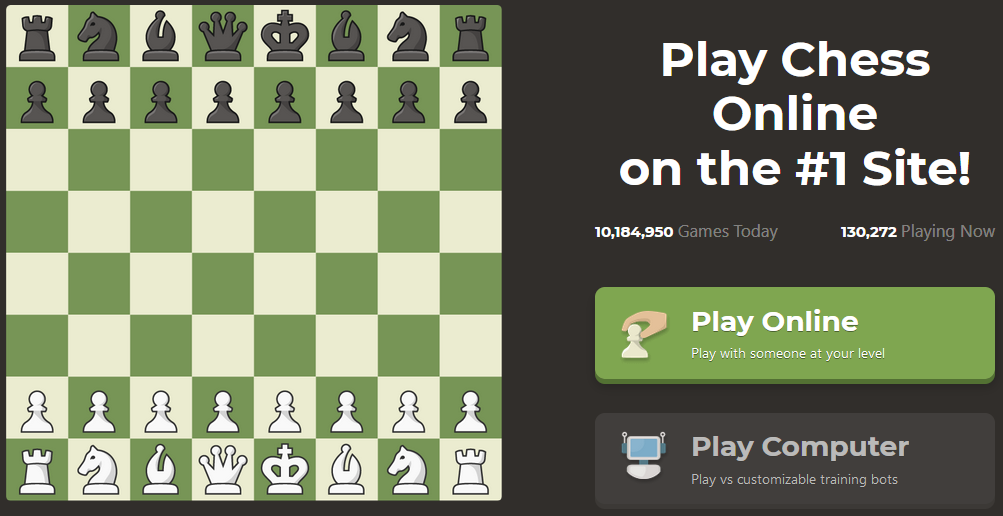 Capture with pawns using the “en passant” rule. En passant, meaning “in passing” in French, is when one pawn captures another pawn after its starting move. You can only do en passant if your opponent has moved a pawn 2 squares forward from its starting position so it’s next to one of your pawns. If this happens, you may move your pawn into the space behind your opponent’s pawn to capture it.

Promote a pawn by getting it across the board. If you move a pawn to the back row on your opponent’s side of the board, it immediately gets promoted to any piece (besides the king) of your choosing. In most cases, it’s best to choose to promote to a queen because the queen is the most powerful piece. It doesn’t matter if your queen has already been captured when you promote your pawn. Thus, you could have multiple queens on the board at a time.

Protect your king by castling. Once during the game, you may choose to make a special move known as castling. To castle, move your king two squares horizontally toward either rook. Then on the same move, move the rook to the square immediately on the other side of the king.

Tip: You can only castle if you haven’t moved your king and rook yet during the game and if the spaces between them are empty.

Learn the relative value of each piece. Each piece in a game of chess is valued differently depending on how powerful it is. The queen is the most powerful piece and is worth 9 points. Rooks are worth 5 points, bishops and knights are worth 3, and pawns are worth 1 point. Try to protect your more powerful pieces so you can use them later in the game.

Protect your pieces. Every time your opponent makes a move, take some time to scan the board. Move pieces out of the way if your opponent is going to capture them next turn. Try catching the piece that’s threatening your piece or move one of your pieces to threaten a strong piece your opponent has.

Tip: Keep 1 or 2 pawns in the center of the board so you can still use your stronger pieces to attack.