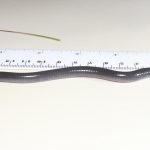 A strange new species of worm-like amphibian which was recently discovered in Panama has been named after President Donald Trump, by a company that says it wanted to raise awareness about the problem of climate change. U.K. sustainable construction firm EnviroBuild paid $25,000 for the right to name the amphibian Dermophis donaldtrumpi at an auction […]